With the United States entry into World War II against the Empire of Japan in December 1941, Claire Chennault, the commander of the American Volunteer Group (AVG) (known as the Flying Tigers) of the Chinese Air Force was called to Chungking, China, on March 29, 1942, for a conference to decide the fate of the AVG. Present at the conference were Chiang Kai-shek; his wife, Madame Chiang; Lt. Gen. Joseph W. Stilwell, commander of all U.S. forces in the China Burma India Theater; and Colonel Clayton L. Bissell, who had arrived in early March. Bissell was General Henry H. ‘Hap’ Arnold’s choice to command the USAAF’s proposed combat organization in China.

As early as December 30, 1941, the U.S. War Department in Washington, D.C., had authorized the induction of the Flying Tigers into the U.S. Army Air Forces (USAAF). Chennault was opposed to inducting the Flying Tigers into the Army. Stilwell and Bissell made it clear to both Chennault and Chiang that unless the AVG became part of the U.S. Army Air Force, its supplies would be cut off. Chennault agreed to return to active duty but he made it clear to Stilwell that his men would have to speak for themselves.

Chiang Kai-shek finally agreed to induction of the AVG into the USAAF, after Stilwell promised that the fighter group absorbing the induction would remain in China with Chennault in command. With the situation in Burma rapidly deteriorating, Stilwell and Bissell wanted the AVG dissolved by April 30, 1942. Chennault, wanting to keep the Flying Tigers going as long as possible, proposed the group disband on July 4, when the AVG’s contracts with the Nationalist Chinese government expired. Stilwell and Bissell accepted.

Chennault was recalled to active duty in the USAAF on April 15, 1942. He was promoted eight days later, on April 23, from colonel to brigadier general. Chennault was told that he would have to be satisfied to command a China Air Task Force of fighters and bombers as part of the Tenth Air Force. Its mission was to defend the aerial supply operation over the Himalayan Mountains between India and China—nicknamed the Hump—and to provide air support for Chinese ground forces. Bissell had been promoted to brigadier general with one day’s seniority to Chennault in order to command all American air units in China as Stillwell’s Air Commander (in August 1942 he became commanding general of the Tenth Air Force). Friction developed when Chennault and the Chinese government were disturbed by the possibility that Chennault would no longer control combat operations in China. However, when Tenth Air Force commanding General Lewis Brereton was transferred to Egypt on June 26, Stillwell used the occasion to issue an announcement that Chennault would continue to command all air operations in China.

The CATF had 51 fighters in July 1942–31 81A-1 and P-40B Tomahawks, and 20 P-40E Kittyhawks. Only 29 were flyable. The 81A-1s and P-40Bs were from the original 100 fighters China had purchased for use by the Flying Tigers; the P-40Es had been flown from India to China in May 1942 as part of the 23rd Fighter Group, attached to the AVG to gain experience and provide continuity to the takeover of operations of the AVG. Both fighters

were good medium-altitude day fighters, with their best performance between 15,000 and 18,000 feet, and they were excellent ground-strafing aircraft. Chennault also had seven B-25C Mitchell medium bombers, out of an original 12 sent from India (four were lost on a bombing mission en route and a fifth developed mechanical problems such that it was grounded and used for spare parts).

The AVG was disbanded on July 4, 1942, simultaneous with the activation of the 23rd FG. Its personnel were offered USAAF commissions but only five of the AVG pilots accepted them. The remainder of the AVG pilots, many disgruntled with Bissell, became civilian transport pilots in China, went back to America into other jobs, or joined or rejoined the other military services and fought elsewhere in the war. An example was Fritz Wolf who returned to the Navy with the rank of Lieutenant, senior grade and assigned as fighter pilot instructor at the Jacksonville Naval Air Station in Florida.

The American Volunteer Group was replaced the 23rd Fighter Group with the 74th, 75th and 76th Fighter squadrons. A fourth fighter squadron for the 23rd Group was obtained by subterfuge. In June and July 1942, Chennault got the Tenth Air Force in India to transfer the 16th Fighter Squadron, commanded by Major John Alison, to his main base in Kunming, China, to gain combat experience. When the last 16th Squadron Curtiss P-40E Kittyhawks arrived in Kunming in July 1942, Chennault took them into the CATF–and never returned them. The 11th Medium Bombardment Squadron, consisting of the seven B-25s flown in from India, made up the other half of Chennault’s command.

On March 19, 1943, the CATF was disbanded and its units made part of the newly-activated Fourteenth Air Force, with Chennault, now a major general, still in command. In the nine months of its existence, the China Air Task Force shot down 149 Japanese planes, plus 85 probable, with a loss of only 16 P-40s. It had flown 65 bombing missions against Japanese targets in China, Burma and Indochina, dropping 311 tons of bombs and losing only one B-25 bomber.

After the China Air Task Force was discontinued, the Fourteenth Air Force (14 AF) was established by the special order of President Roosevelt on March 10, 1943. Chennault was appointed the commander and promoted to Major General. The “Flying Tigers” of 14 AF (who adopted the “Flying Tigers” designation from the AVG) conducted highly effective fighter and bomber operations along a wide front that stretched from the bend of the Yellow River and Tsinan in the north to Indochina in the south, from Chengtu and the Salween River in the west to the China Sea and the island of Formosa in the east. They were also instrumental in supplying Chinese forces through the airlift of cargo across “The Hump” in the China-Burma-India Theater. By the end of World War II, 14 AF had achieved air superiority over the skies of China and established a ratio of 7.7 enemy planes destroyed for every American plane lost in combat.

Overall, military officials estimated that over 4,000 Japanese planes were destroyed or damaged in the China-Burma-India Theater during World War II. In addition, they estimated that air units in China destroyed 1,100,000 tons of shipping, 1,079 locomotives, 4,836 trucks and 580 bridges. The United States Army Air Corps credits 14 AF with the destruction of 2,315 Japanese aircraft, 356 bridges, 1,225 locomotives and 712 railroad cars.

In addition to the core Fourteenth Air Force (14AF) structure, a second group: The Chinese-American Composite Wing, existed as a combined 1st Bomber, 3rd and 5th Fighter Groups with pilots from both the United States and the Republic of China. U.S. service personnel destined for the CACW entered the China Theater in mid-July 1943. Aircraft assigned to the CACW included late-model P-40 Warhawks with the Nationalist Chinese Air Force 12-pointed star national insignia, rudder markings and squadron/aircraft numbering and B-25 “Mitchell” light bombers. In late 1944, USAAF-marked P-51 Mustangs began to be assigned to CACW pilots – first, P-51B and C models, then, in early 1945, “D” and “K” model (sharing many of the external characteristics of the “D” model aircraft including the bubble canopy) reduced-weight versions. All U.S. pilots assigned to the CACW were listed as rated pilots in Chinese Air Force, and were authorized to wearing both nations’ pilot’s wings. Members of the 3rd FG were honored with a Distinguished Unit Citation (now, Presidential Unit Citation) for a sustained campaign: Mission “A”, in the late summer of 1944. Mission “A” halted a major Japanese ground offensive, and resulted in the award of individual decorations for the several of group pilots for the planning and execution of the mission.

Most CACW bases existed near the boundary of Japanese-Occupied China, and one “Valley Field” existed in an area within Japanese-held territory. Specific field locations include Hanchung, Ankang, Hsian, Laohokow, Enshih, Liangshan, Peishyi, Chihkiang, Hengyang, Kweilin, Liuchow, Chanyi, Suichwan, and Lingling.
Flying Tiger Delegation Awarded Congressional Recognition
Realizing the potential loss to history he immediately requested the Chinese authorities to consider an American and Chinese joint effort to restore the Command Cave to its appearance when General Chennault and his Flying Tigers operated from there. A memorial plaza and museum were added to the plan in which the Chinese agreed to donate the land and funds for the construction work. The Americans would also contribute funding as well as memorabilia to be displayed in the museum.

When the ground breaking for the Park occurred in March 2010 Larry Jobe remarked “America and China stood together in battle. Today we stand together again in cooperation and friendship to recognize those veterans who fought and died to preserve our freedom”

According to Michael Bianco the interest and support for the Flying Tigers has been steadily expanding in both the USA and China which has resulted in a growing number of books and two feature films being set up in Hollywood. He believes the opening of the Flying Tiger Heritage Park in 2011 will accelerate the interest in China and the USA which will preserve the legacy of these valiant American veterans and the Chinese who served with them nearly 70 years ago. 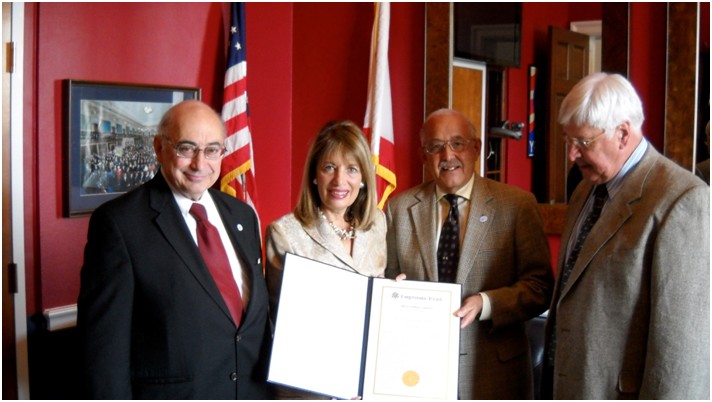